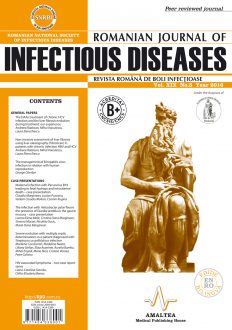 Streptococcus gallolyticus, member of streptococcus bovis group colonizes digestive tubes of birds, cows and human (2.5-15%). Literature describes the association between bacteriemia with Streptococcus gallolyticus and colon tumours but also extracolonic lesions (bacterial endocarditis, vertebral osteomyelitis, dyscitis, colangitis, lung tumors, ovarian tumors).
We report the case of a 60 years old male caucasian patient who was diagnosed with vertebral osteomyelitis as the first lesion of Streptococcus gallolyticus infection identified by blood culture. Other lesions were diagnosed on aortic valve (bacterian endocarditis), right popliteal artery (popliteal artery thrombosis), right knee (arthritis). Even if there was a clinical and biological improvement during the treatment, the imaging tests done after 30 and 45 days from the diagnosis showed severe aortic insuficiency so surgical intervention for aortic valvuloplasty was done in a short time. Vertebral and popliteal artery lesions have improved within two months of antibiotic treatment. Colonoscopy, which was done 6 weeks from the diagnosis showed colonic polyps – risk factors of Streptococcus gallolyticus bacteriemia.
This case proves that Streptococcus gallolyticus infection has a silent period followed by severe evolution by multiple septic lesions inspite of the precocious treatment and warn of the necessity of digestive investigations at these patients.

The intended audience of the site content is professionals from the medical and pharmaceutical community.
This site does not collect any personal data nor does it use cookies that might obtain such data from your browser. [ info ]
Agree
Contact