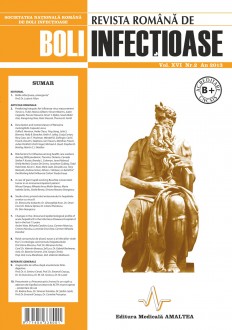 Changes in the viral subtypes, in hygienic measures and the effects of the national vaccination program are factors that can influence the epidemiological and clinical features of acute hepatitis B. Material and methods. we retrospectively studied and compared two groups of patients diagnosed with acute hepatitis B in the Infectious Diseases Hospital of Iasi between 1997 and 2001 (group 1-582 cases) and between 2007 and 2011 (group 2-142 cases).

Conclusions. The clinical and epidemiological profile of acute hepatitis B has significantly changed in the last 15 years, the decrease in the annual number of cases being paralleled by an increase of severe or cholestatic forms of disease