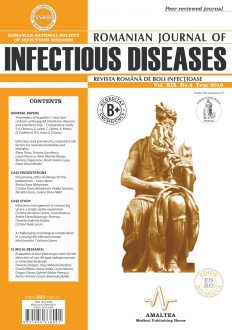 A CHALLENGING NEUROLOGICAL COMPLICATION IN A YOUNG HIV-INFECTED WOMAN

Background: The management of HIV infected patients with immune reconstitution inflammatory syndrome (IRIS) represents a challenge, especially in those with cerebral opportunistic infections.
Case description: We present a 26 year-old woman, diagnosed with HIV infection and admitted in our hospital with severe anemia, depression and anxiety. Lab screens showed severe anemia and immunosuppression (CD4 cell count 63 cells/mm3) and high plasma HIV-RNA (6.25 log10 copies/mL). After one month treatment with lamivudine 3TC, tenofovir (TDF) and raltegravir RAL and important immune recovery (CD4 192 cells/mm3) and significant decay in HIV viral load to 1.5 log10 copies/mL were noticed. The initial clinical evolution was unfavorable with the appearance of generalized seizures, movement disturbances, auditory hallucinations and right hemiparesis. CSF exam was normal with negative bacterial and fungal cultures but with detectable HIV-RNA – 82 copies/mL (1.90 log10 copies/mL). Brain MRI showed hyperintense lesions on T2 and FLAIR sequences and hypointense on T1 sequences, localized in fronto-temporal areas, right cerebellum and pons. In evolution, there was a continuing worsening of psychiatric and neurological symptoms with severe tremor, axial hypotonia, generalized weakness and severe sleep disturbances. Atypical brain MRI lesions in the presence of severe psychiatric symptoms raised difficulties in establishing the cause of the neurological complication. The important progression of the lesion in the white matter, the appearance of contrast enhancement and the presence of JC – DNA in CSF suggested the diagnosis of PML IRIS. The patient was treated with high doses of cortisone, antipsychotic drugs and continued cART, with a slow clinical recovery and brain MRI improvement starting with 4 months of treatment.
Conclusion: The diagnosis of the neurological complication was difficult due to the atypical onset, the presence of concomitant psychiatric symptoms and the atypical initial brain imaging.

The intended audience of the site content is professionals from the medical and pharmaceutical community.
This site does not collect any personal data nor does it use cookies that might obtain such data from your browser. [ info ]
Agree
Contact