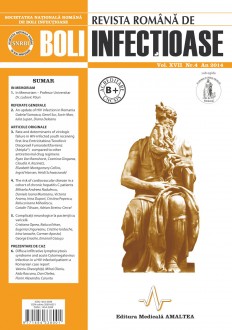 Diffuse infiltrative lymphocytosis syndrome (DILS), a particular feature of HIV infection, is defined by the oligoclonal expansion of CD8+ T lymphocytes in response to HIV antigens. This syndrom is often associated with lymphocytic infiltration of various organs, especially the salivary glands, followed by the onset of symptoms of Sjögren’s-like syndrome (xerostomia and xerophthalmia). The lung is the most common extra glandular site affected during the evolution of the disease, causing a clinical and imaging pattern of interstitial pneumonia. We describe a case of a 43-years-old patient with HIV infection who presented, at the time of diagnosis, a clinical Sicca syndrome and interstitial pneumonia highly suggestive for PCP. Initial biological evaluation showed a high CD8+ lymphocytosis (8819/mm3 ) which raised the suspicion of DILS. Simultaneously, acute CMV infection with CMV pneumonitis was confirmed. The subsequent investigations ruled out the diagnosis of PCP, autoimmune diseases and malignancies. This case has some peculiarities related to HIV infection (higher viral replication [HIV RNA 115,000,000 cp/mL], acute HIV infection being excluded), and acute CMV infection associated with CD8+ lymphocytosis syndrome with common clinical and biological features. The clinical and laboratory evolution was favorable under treatment with ganciclovir, corticosteroids and antiretroviral drugs.